Panorama of Tasersuatsiaq (also known as Lake Ferguson) with boathouses of the Kangerlussuaq Roklub (Rowing Club).

South of Kangerlussuaq is a bridge over Qinnguata Kuussua (the Watson River) and a fork in the gravel road. Turn left and the road climbs Black Ridge and the TACAN, bear right and the road follows the edge of the fjord, past the dump, and winds to Tasersuatsiaq, the Greenlandic name, which isn't very specific — it just means "large pond." According to an inscription on the back of a photograph from between 1925 and 1945 in the collection of the Danish Arctic Institute that shows hunters portaging their kayaks from the fjord to the lake, it was also known as Lake Angmaglortoq. Angmaglortoq, I am guessing, is derived from angmagssat, the old spelling of the Greenlandic word for capelin fish, so maybe it had the reputation as a place where the fish were found. But people in town still refer to it by the name it was given by the Americans when they built an airbase in Kangerlussuaq during World War II: Lake Ferguson, named for US Weather Bureau meteorologist Sterling Price Ferguson (1868-1959), who participated in the University of Michigan Greenland scientific expeditions there in 1926-31.

One cold mid-September day I set off for the lake when the sun came out after a morning of flurries. My weather app called for a 50% chance of snow flurries, which turned out to be accurate — periods of partly sunny skies alternated with low grey clouds and flurries blowing in from the north. In between flurries, I photographed the sights along the way: smoke rising from trash burning at the town dump, the lake outlet which is conducted through a pipe under the road to a stream that leads to the fjord. Another road veers uphill past a humorous musk ox crossing sign to two small vacation homes owned by Danes that are perched on a hillside. 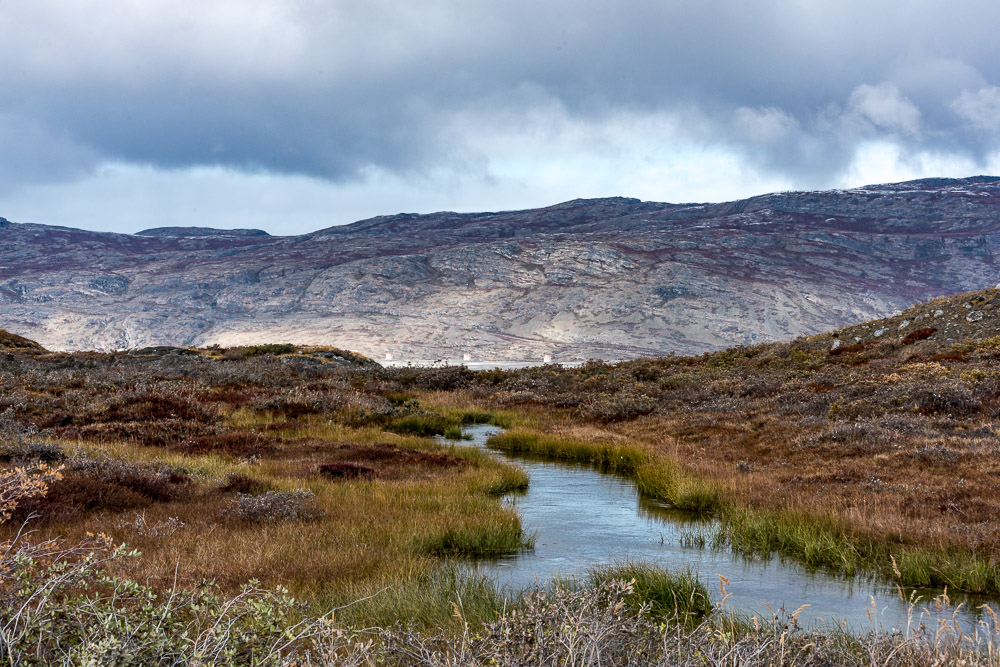 Water from Lake Ferguson drains into the fjord. The old oil tanks from the military base on the opposite shore are visible in the distance.

Smoke from burning trash at the town junkyard. In the Arctic, the burning of trash in open fires is a common, if not environmentally friendly, means of disposing of it.

Along the shores of the lake are a group of boathouses and sheds of the Kangerlussuaq Roklub — Danish for "Rowing Club." Inverted rowboats sat on planks surrounded by patches of snow from flurries earlier in the day with "No Swimming" and "No Snowmobiling" signs posted nearby — Lake Ferguson is the town drinking water reservoir.

Up a small hill overlooking the lake and the restaurant are a couple of utilitarian buildings, remnants of the old military base, formerly housing a power plant and the Armed Forces radio and television stations. One serviceman recalls a broadcaster who did parody ads for the fictional Lake Ferguson Estates housing development and Lake Ferguson Mall for shoppers, "all for the entertainment of minds on the radio. Gone, now. But the Row Club lives." 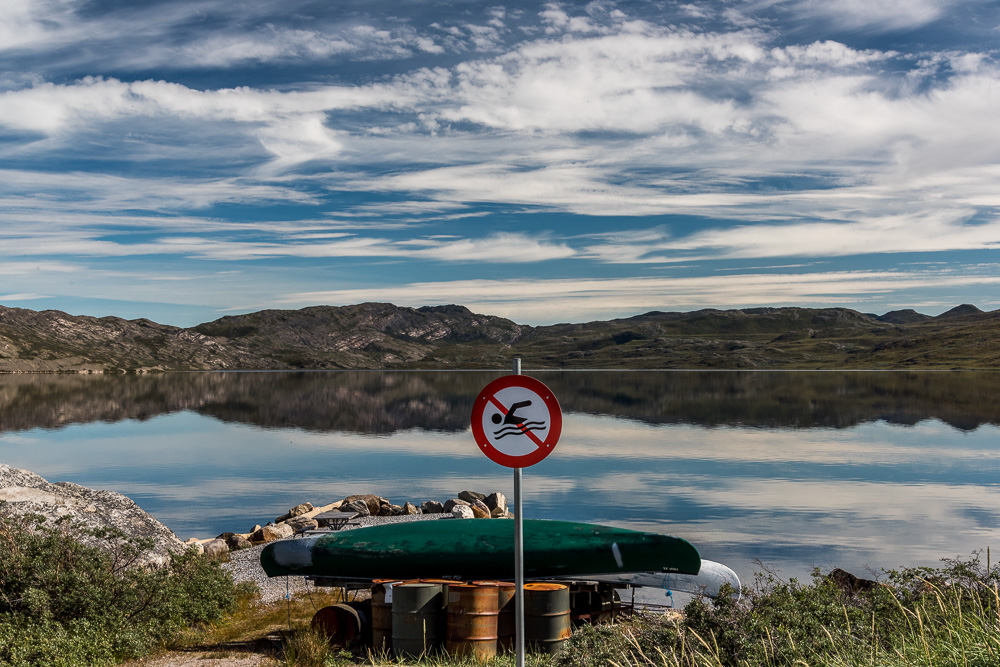 Canoes on the shore of Lake Ferguson near Restaurant Roklubben in the summer of 2018, the first time I visited Kangerlussuaq as part of a tour group. 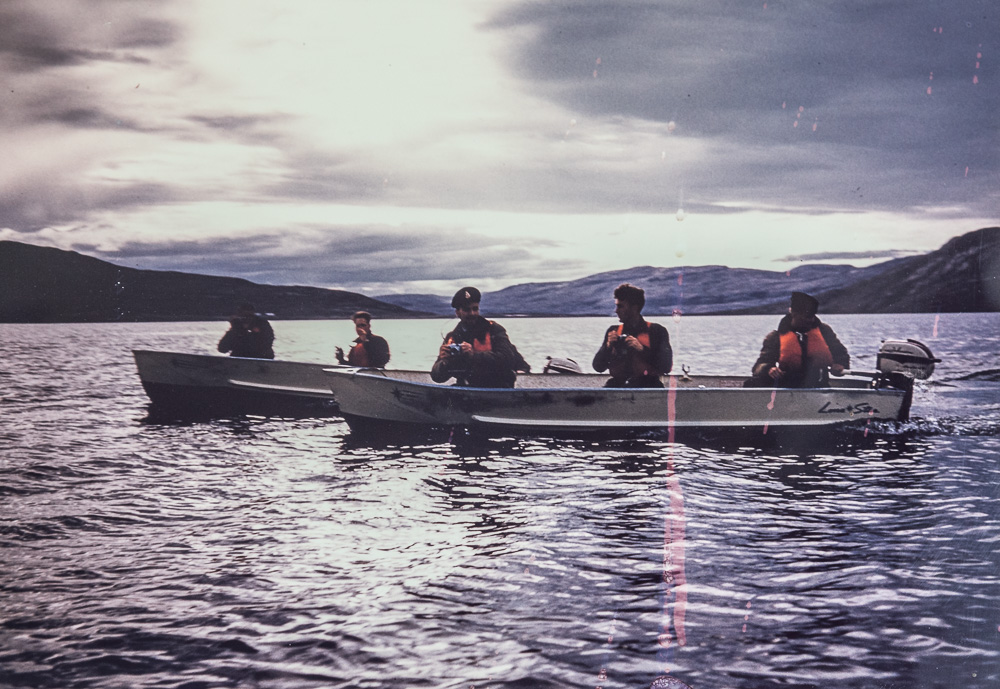 This photo from August 1959 is part of an exhibit about life on the military base in the Kangerlussuaq Museum. The wall label text (translated from Danish) reads: "The air group's base crew has been taken on a fishing trip on Lake Ferguson. The boats could be ordered in the Rec Center at the base and were then checked out at the boathouse itself. Rarely managed to catch anything, but the weekend trips on the lake were a nice diversion."

I wasn't expecting to photograph snow-covered landscapes in September, when temperatures normally stay above freezing, day and night. But snow and cold weather came early this year. A few weeks later, while editing my photos on a large monitor, I realized that I had inadvertently captured a fata morgana on the opposite shoreline. This is a phenomenon sometimes seen in very cold climates where a temperature inversion causes a smeared mirroring effect at the horizon. 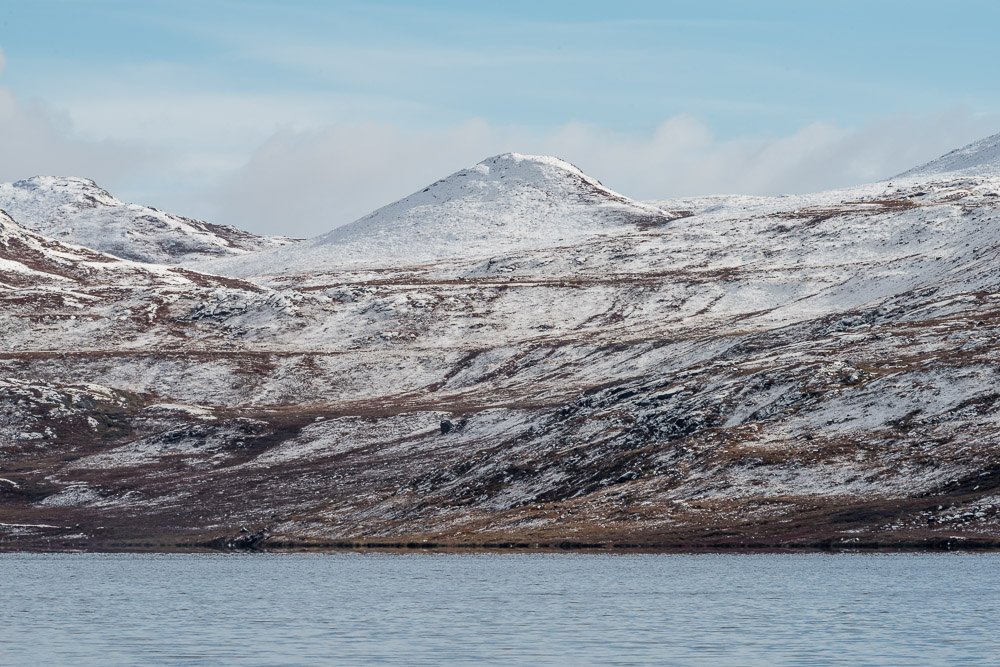 The opposite shore during the brief period of sunshine. 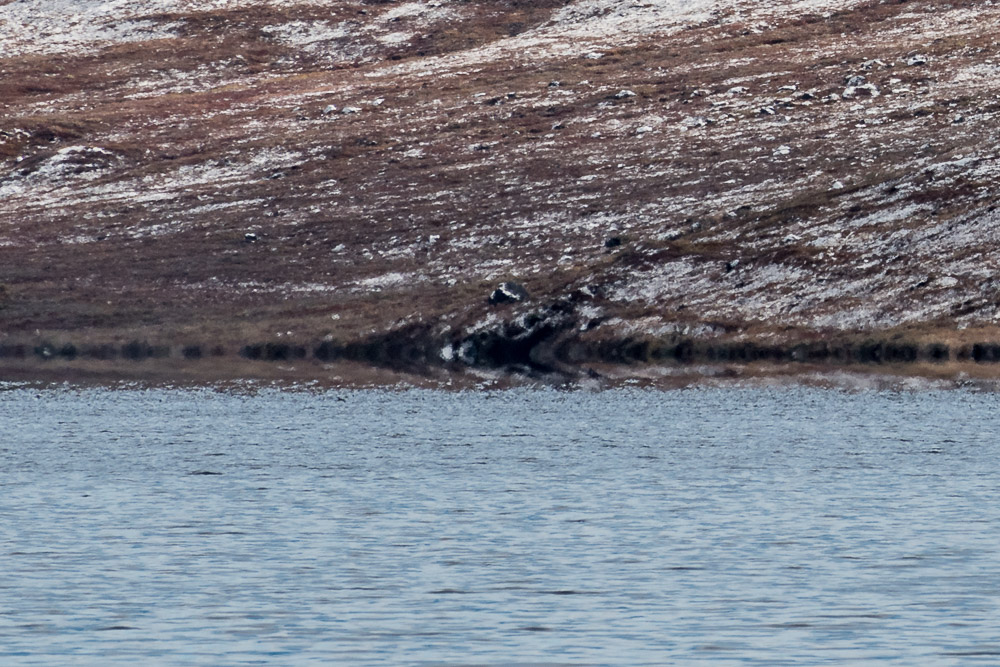 Detail of the fata morgana that I noticed weeks later when I was editing the photo at left. 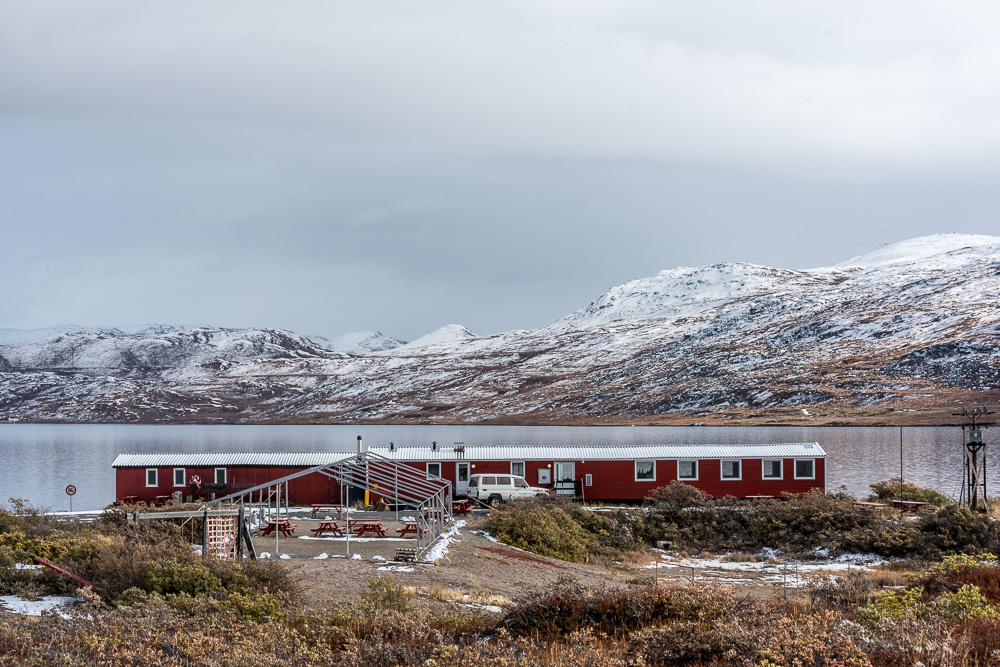 Around a bend in the road further along the shore, a long, low red building with an aluminum roof houses Restaurant Roklubben, which specializes in buffets featuring traditional Greenlandic foods. An empty scaffolding of metal poles enclosed picnic tables that accommodate visiting tour groups in the summer. Caribou skulls and antlers sat on one of the tables in order to be cleaned by the elements, a common sight everywhere in Kangerlussuaq. More were stacked on a grill beside the restaurant building, and as I photographed the tableau, another snow squall moved in. 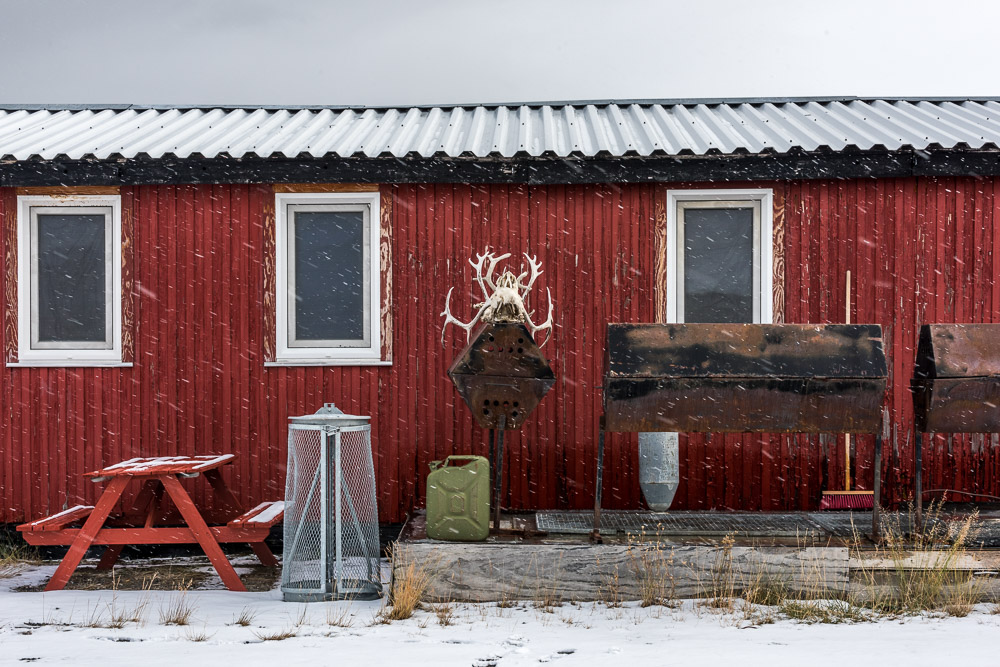 I snapped a few photos as the snow fell, then quickly packed up my camera, put up my hood and made the 45-minute walk home. Living in a rural area without a vehicle made me aware of how much my life in the US centers around being able to drive everywhere, and how much time people elsewhere in the world spend walking. Not that people here don't have cars or ATVs — some do, but they're not easy to obtain. An entrepreneur whom several people spoke of as the richest man in town has a monopoly on rental vehicles. And there are no car dealers — another reason people are eager to see the road to Sisimiut finished for access to a place where they can get a vehicle — even if it is over 80 miles away. Yet when I asked Danes who had relocated here what attracted them, they all spoke of the slower pace of small town life and of walking and feeling closer to nature. There were definitely times I missed the spontaneity and autonomy of driving, especially trudging with a backpack full of camera equipment or groceries in cold and blustery weather.

But I also located a peaceful feeling that comes from surrendering control of time, that you'll get there when you get there, so your mind is free to absorb what's around you or to wander through whatever thoughts and memories surface. Life during lockdown and the pandemic already has shifted my priorities in that regard; and I know I'm not the only one. You'll get there when you get there, and that's okay, walking in Greenland down a gravel road as the snow falls. 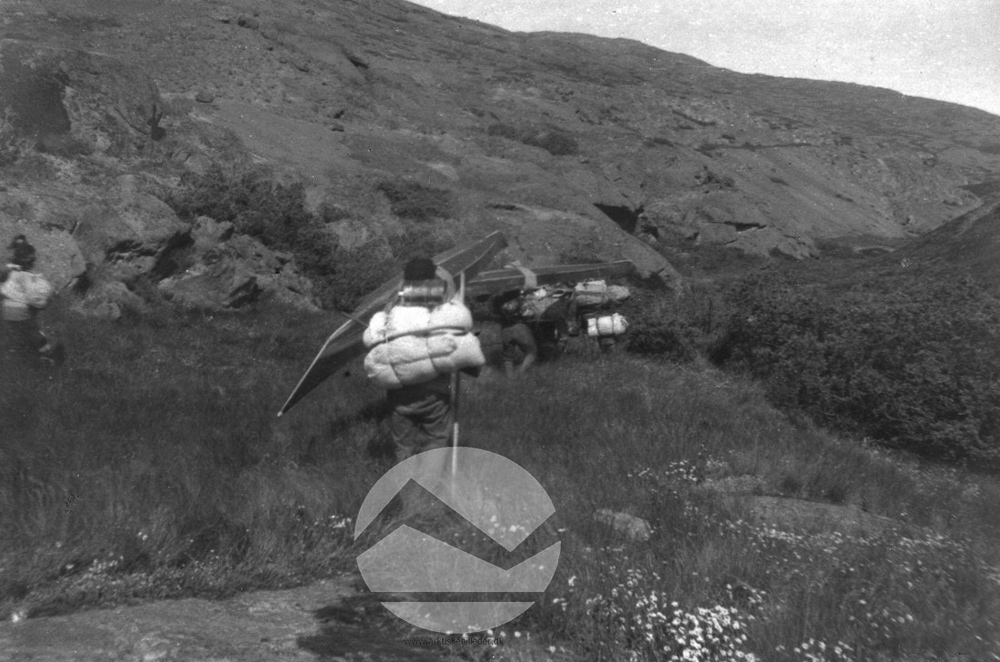 According to an inscription on the back of a photograph from between 1925 and 1945 in the collection of the Danish Arctic Institute that shows hunters portaging their kayaks from the fjord to the lake, it was also known as Lake Angmaglortoq.