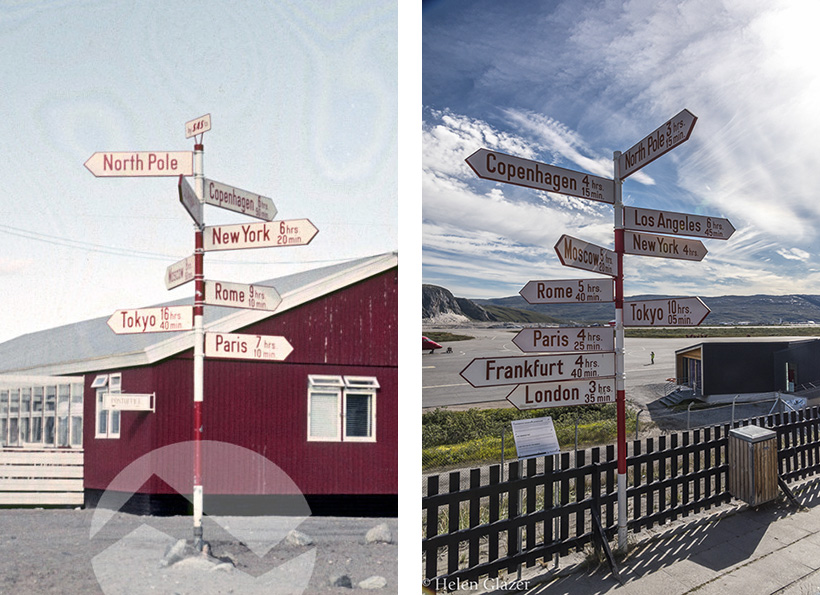 Kangerlussuaq sign in front of the former Danish Hotel in 1959 (left) and at its current location at the airport in 2018 when I was last there (right). Photo on left by J.E. Saaby-Hansen, Collection of Danish Arctic Institute.

In the summer of 2018 I went on an educational tour of the Canadian Arctic and West Greenland. The last stop, Kangerlussuaq, particularly intrigued me: a town of just 500 citizens that only came into existence 80 years ago as an American Air Force Base, which has morphed into an international airport and a science support base for researchers heading elsewhere in Greenland for field work. Unlike other West Greenland coastal towns it is 100 miles from the ocean at the end of a fjord. The only road out of town winds through 19 miles of tundra to the edge of the ice cap that covers 80% of Greenland. The road was built, then shortly thereafter abandoned, by German automakers around 20 years ago.

We spent only about 24 hours there, but I was struck by the highly unusual geopolitical history, combined with the striking geology of the surrounding landscape: tundra, lakes, glaciers and the ice cap, and how human interventions have transformed the area since the mid 20th century. Human impact includes the starkly visible inland retreat of the ice cap edge due to global warming since the Germans built the road. I conceived of a photography project that would capture the transformations and reached out to the then-director of the Sisimiut and Kangerlussuaq Museums, who had been researching its Cold War history and told me she shared my fascination: “There’s no other place like it in Greenland.” She said the museum would be interested in collaborating with me — I'd provide photographs for them to update their exhibits, they'd provide logistical support and advice.

After receiving a Rubys Award from the Robert W. Deutsch Foundation to pursue this project in October 2019, I made my travel arrangements for August 2020 that were upended by the pandemic. In the spring, Greenland closed to international travel and aside from very brief interludes only reopened — partially — in June 2021. I was resigned to putting off my trip for 2022, but in mid July, travel restrictions eased enough that the current museum director (who took over last fall) invited me to come in September.

Making flight arrangements has been considerably complicated (that's an understatement!) by having to navigate the labyrinthine Danish and Greenlandic entry rules related to COVID. My first stop will be Copenhagen, because the rules require I be COVID-tested there before entering Greenland. I won't just be killing time; I'll be going through the vintage photos of Kangerlussuaq in the collection of the Danish Arctic Institute, such as the one above, so I can photograph a series of “then and now” comparisons as part of my project.

I expect to be in Kangerlussuaq from September 3 to 28, living in the dormitory for visiting scientists and researchers. In addition to providing photographs for the museum, my goal is to produce a photo book about the town and its unusual history, which will be the first in any language.

I plan to post online updates while I'm away. So watch this page!