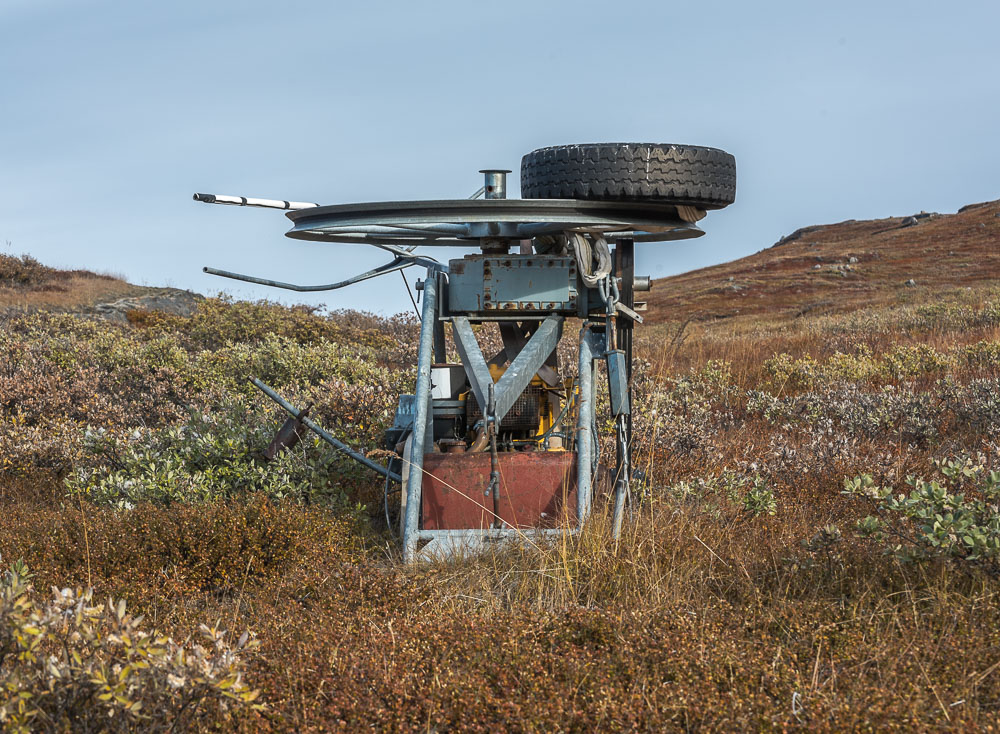 A piece of an old ski lift I passed in search of a US Air Force T-Bird training plane that crashed nearby in 1968, and has been left essentially untouched. I went for what was supposed to be a short uphill walk to view it from a ridge. The ski lift was set up in 2004 and taken down in the last couple of years, but it was never used — not enough snow.

On December 8, 1968, three US Air Force training jets known as T-Birds were flying from Goose Bay, Newfoundland, to Iceland when  they encountered bad weather near the American airbase at Kangerlussuaq. They circled the area hoping to land safely there until they ran out of fuel. Eventually the four men bailed out of the planes which all crashed in the hills near the base. Remarkably, they managed to make it to safety, the only injury among them being one broken arm.

I set off on a sunny, frigid afternoon  to walk to Lake Ferguson, about a mile south of town, and to see if I could check out one of the wrecks on the way, since I am documenting the sites related to the town's history. I wasn't precisely sure of where it was, but I knew that it was near the road. Along the way, a close-up view of the beak of a dead bird by the side of the road definitively ID'd those cawing black birds I'd seen circling Black Ridge as not crows but ravens. I passed a rock formation hung with tapestry-like vegetation in fall colors. I reached one of the historical markers placed around town and saw some machine parts that I thought were part of the wreck — one right by the road, the other slightly uphill (I've since been informed they're part of an old ski lift). A police car was parked nearby. A tall, bald man standing beside it looked over at me. "Hej [pronounced hi]," I said, which is how people greet each other in Greenland. He walked over and said something in Danish and then said, "Oh you don't speak Danish?" and switched to English. His face was heavily perspired despite the 28 degree air temperature. He went on to point out a map on the historical marker that showed the location of the wreck, and pointed uphill where a narrow track through the tundra led to a ridge. "I just came from there. I saw a musk ox, but just one today. It was walking off so it might not be there anymore, but you can see the wreck from there, by the shore of the lake. It's about two kilometers to that ridge where you can see it."

Two kilometers, I thought — about six-tenths of a mile. That sounded easy. So I thanked him and headed uphill. It's not as if it's a formal trail, although the footprints in the dirt and the lack of bushes made it pretty obvious. But periodically I'd turn around to see where I'd just come from. In the photo from partway up the first incline you can see the policeman and his cruiser at the foot of the hill. 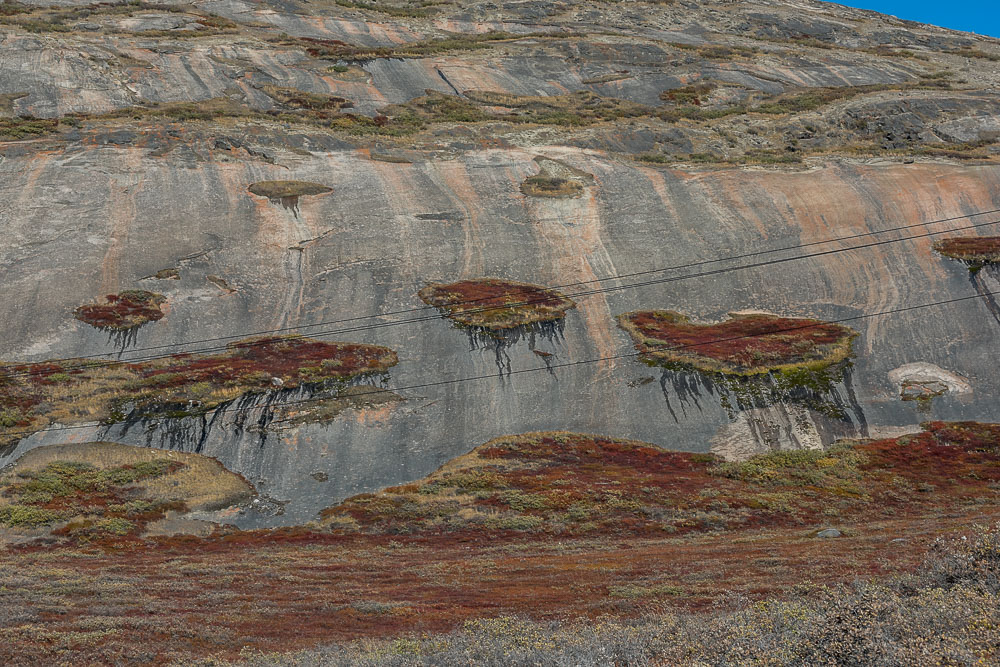 Along the road was a broad rock hung with tapestry-like vegetation and in the lower right corner, a white shape and black markings that somewhat resembles a man wearing a turban that was nicknamed "the Ayatollah" in the 1980s (above) and a dead raven (right). 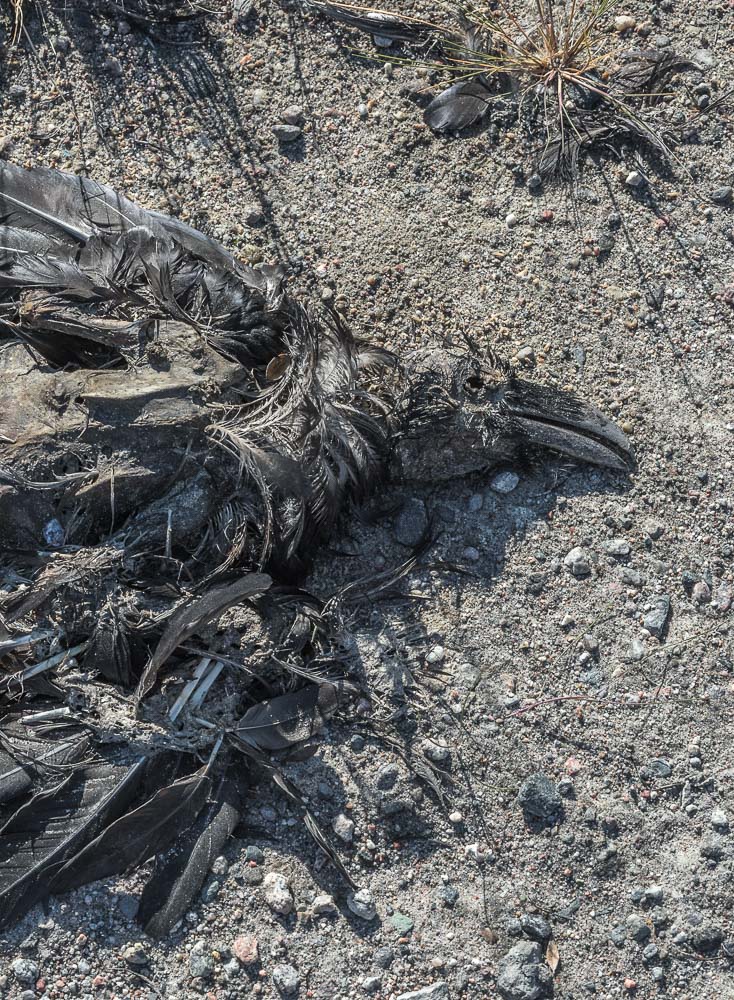 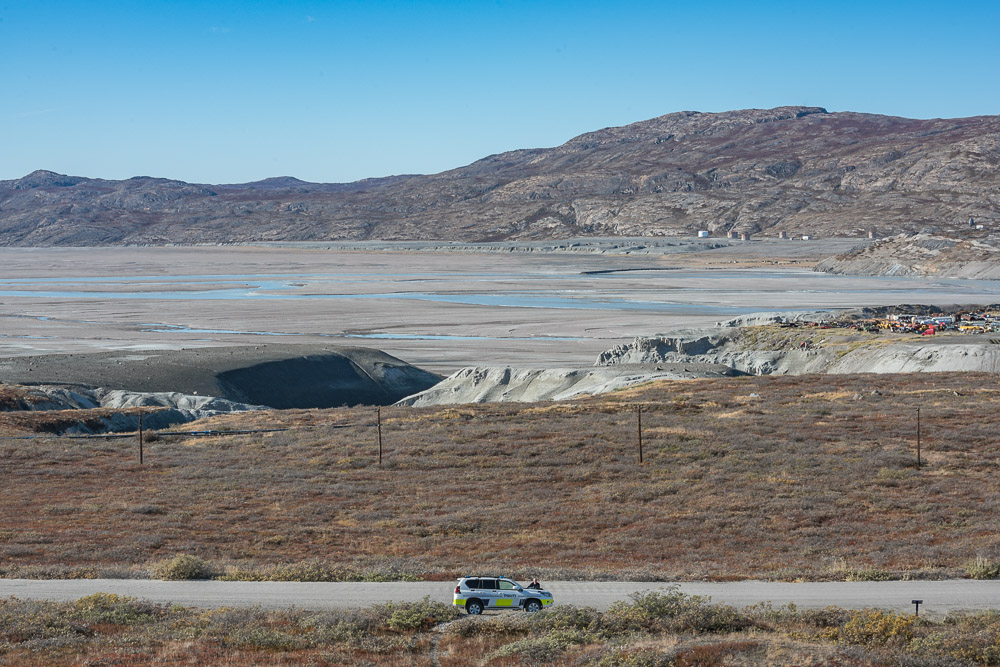 The friendly policeman rests from his hike beside his cruiser (left). Looking downhill periodically I figure there's no way I can get lost because I can always see familiar landmarks. 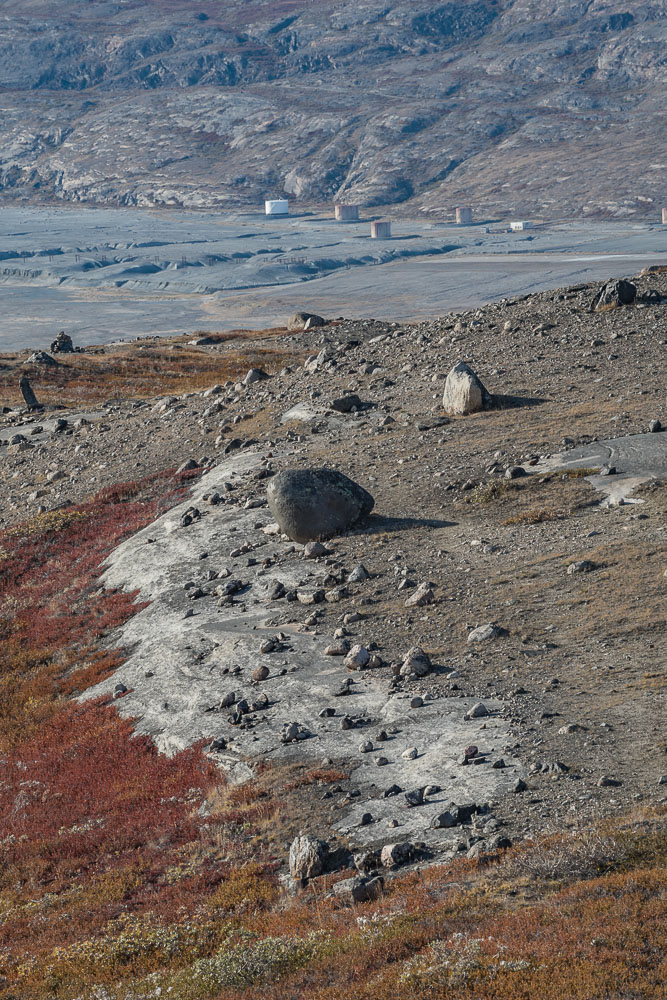 I get up to the top of one ridge. Look around. No lake in sight except a little one, more of a pond, really, to my left, which I had seen before from Black Ridge, so I knew that wasn't it. So on to what looks like the top of the next ridge. Again, no lake. And every time I got to what I thought would be the top, there was yet another taller rise ahead of me. I kept passing cairns that people had stacked, so I figured I was on something of a path that hikers used. Eventually there was no real beaten path, but there were a lot of flat rocks to walk on. All right there's the top. Ah, no, yet another one ahead of me. This went on for an hour. Still no sign of a lake, but at the top of the last rise I scaled a vista opened up to the north and I realized I was pretty much even with the white spherical weather stations at the summit of Tacan, a mountain across a ravine from me. From that spot I also had the clearest view of the ice cap I had had so far on this trip, and to the south a row of pretty snow-dusted mountains sparkled in the late afternoon sun. Hold on, I must be pretty high up and have definitely gone more than two kilometers. Enough of this; I don't know where that lake is, but I'm coming down. 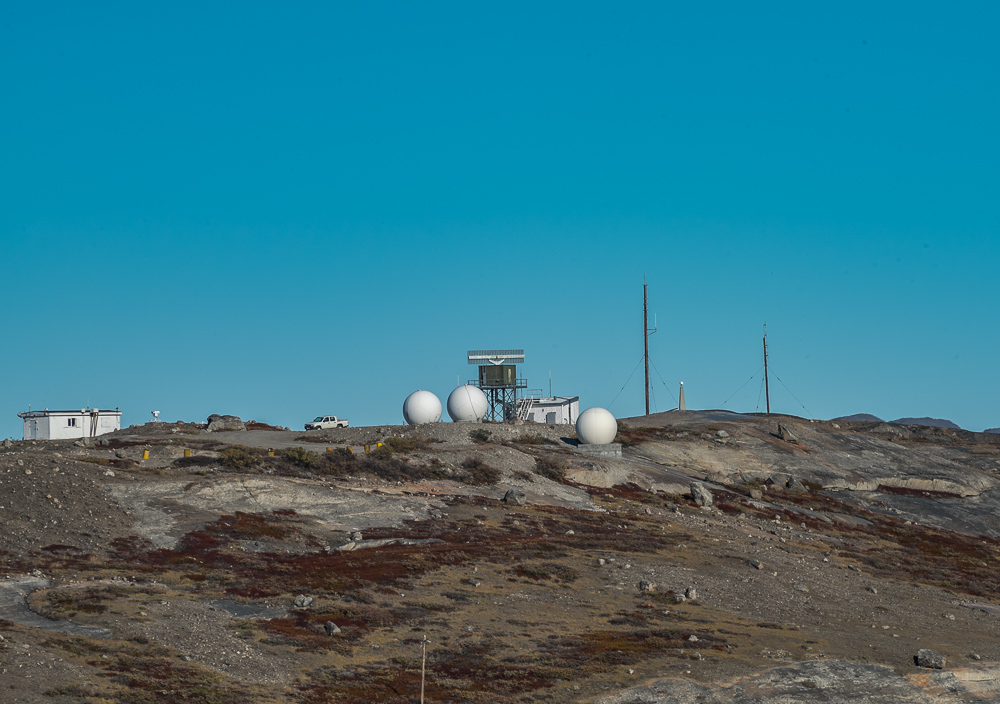 I'm about even with the weather station on the summit of Tacan. I've definitely gone farther than I meant to. 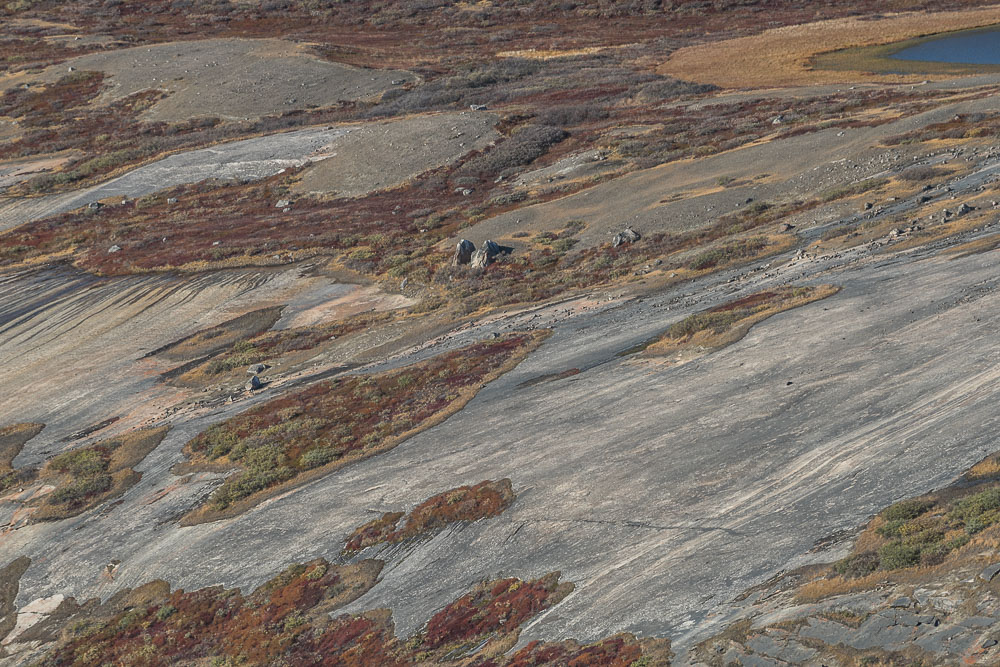 On the same side, a rock and vegetation abstraction, with a little lake upper right. 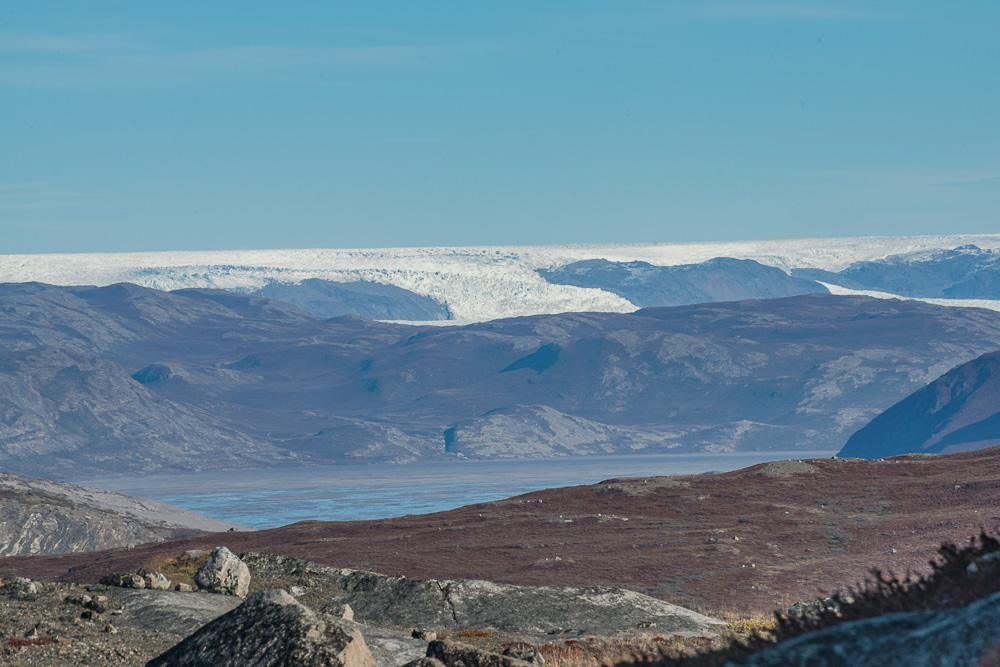 The grandeur of the ice cap in the distance, over 15 miles away. 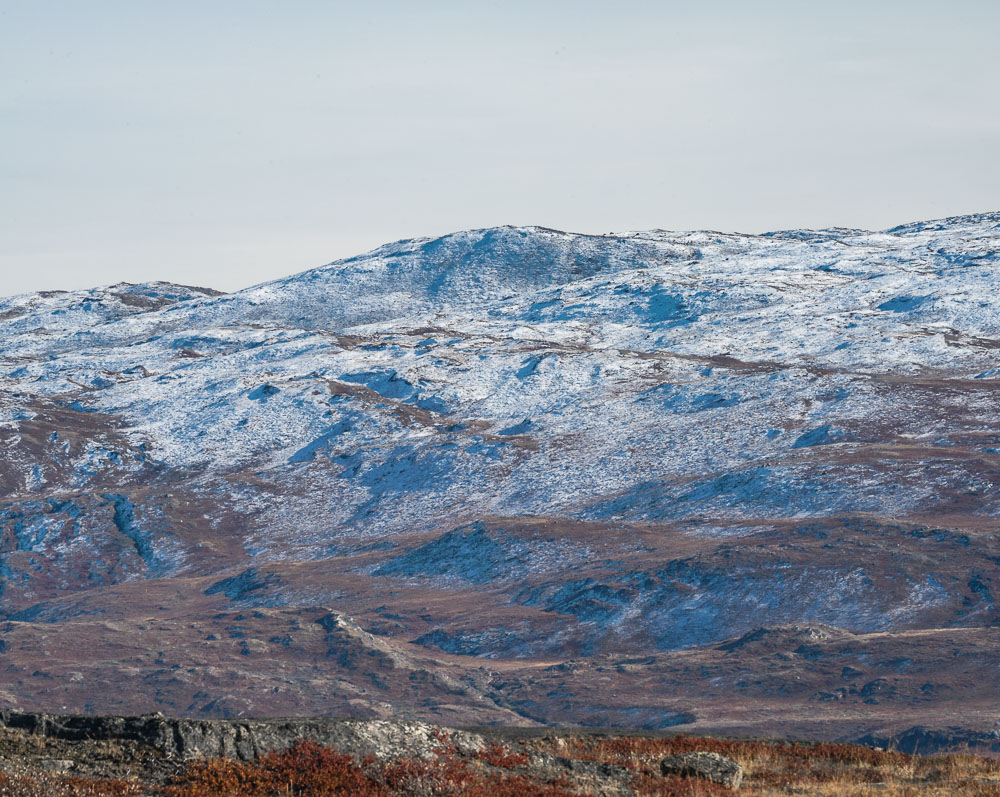 To my south, pretty snow-dusted mountains sparkle in the afternoon sun.

After taking some photos, I turned around, trying to remember the landmarks I'd made note of on the way up. There's no way I could really get lost — I could see the road and other landmarks below very clearly. There are no trees, as we think of them, in Greenland; they're related to the trees we're familiar with but are dwarf versions that typically only grow to one or two feet high. These hills were covered with dwarf birch and bilberry bushes, beneath which was moss. I knew I was a little left (or south) of where I'd come up, but figured when I got down further, I'd see a cairn or other rocks I recognized and find my way back to the beaten path. Going down was easier and quicker than coming up...and then, below me to my left, there it was: a small lake with some shiny objects near the shore. So that's the lake. As I was hiking up it had been obscured by the slope of the hill. I stopped, looked through my telephoto lens, zoomed in. Indeed, I could just make out pieces of twisted metal. Clearly the men made the right decision to eject when they did. Now the two kilometers he was talking about makes sense; mystery solved. 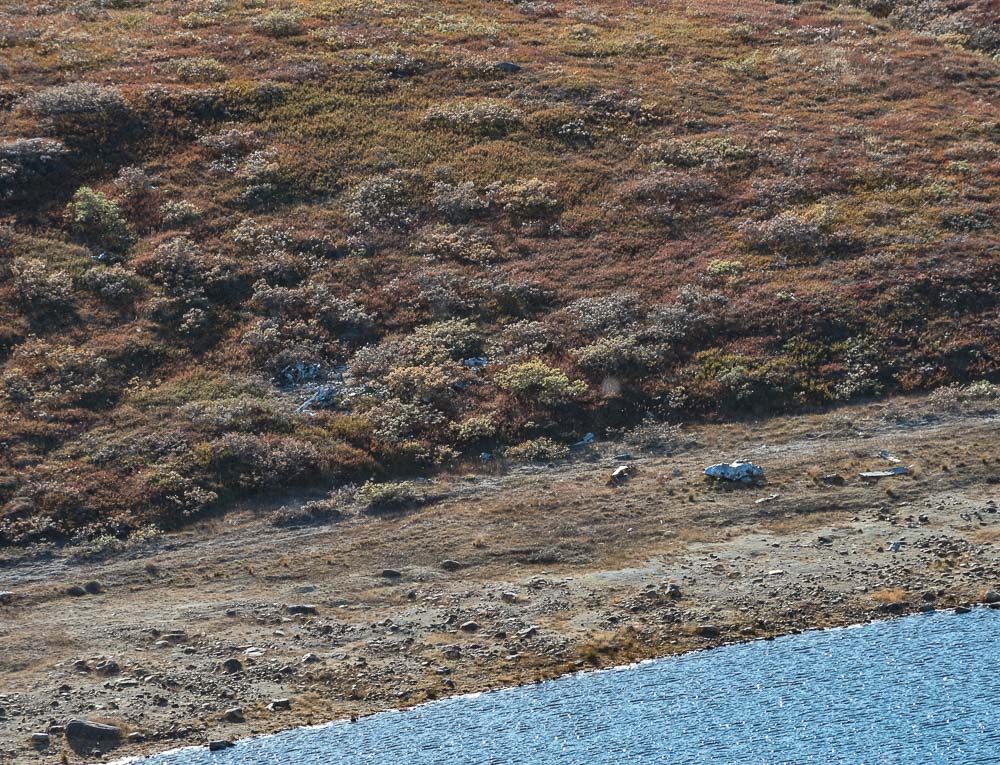 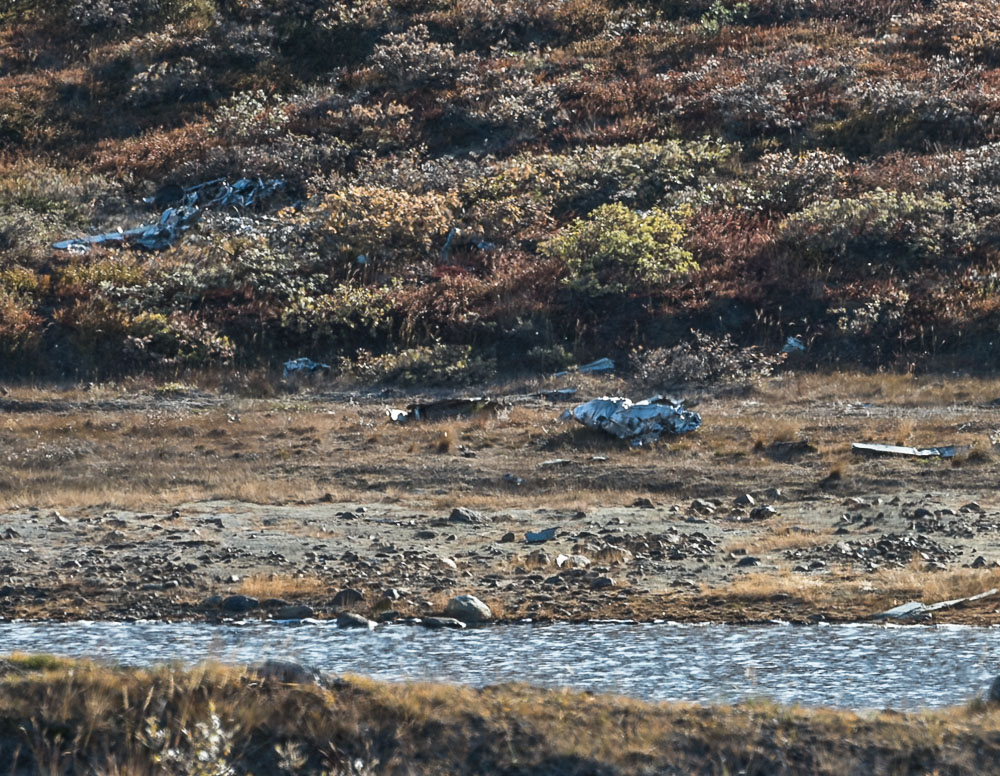 I continue downhill — should be back at the road in ten minutes. Oops, not so fast, I'm looking over the edge of a very steep hill! As I said, no way I can get lost, so nothing to worry about yet. However, I am slightly rattled by how quickly the terrain can change and not in the mood for more uphill climbing, so I hope I don't have to double back too far to find a way back across to the way I came up. As I trudge back uphill I spot a cairn that I recognize, with a big flat rock on top. I wade there through the little bushes and look downhill — there's the beaten track. The rest is easy. About two kilometers.

Maybe 10 yards from the bottom I am even with a portion of the skilift that can easily be seen from the road. It occurs to me that this assemblage wouldn't be totally out of place in an art gallery. People would take it to be a found object sculpture in the manner of Robert Rauschenberg. I wade through the little bushes to it, and photograph it from various angles. I put away the camera and head for home. Walking in the shade it's feeling more chilly than it was earlier in the sun, I'm  more than ready to get back to the Science Center dorm and make dinner. I pass the dead raven — I know from having timed it on the way here that it's a 20-minute walk back to the dorm. About two kilometers. 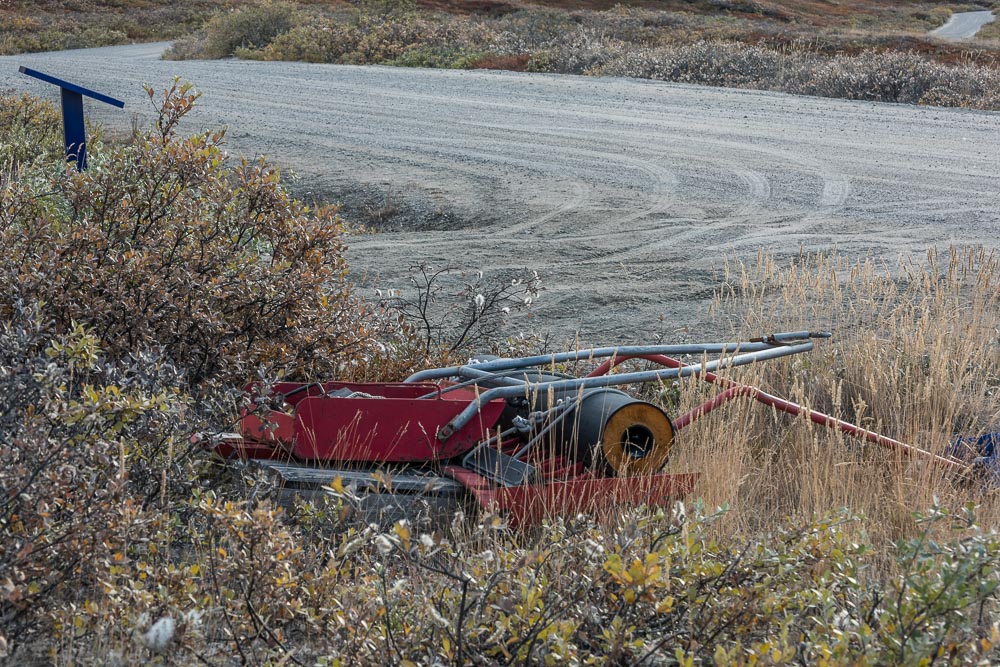 More wreckage alongside the road, with the historical marker upper left 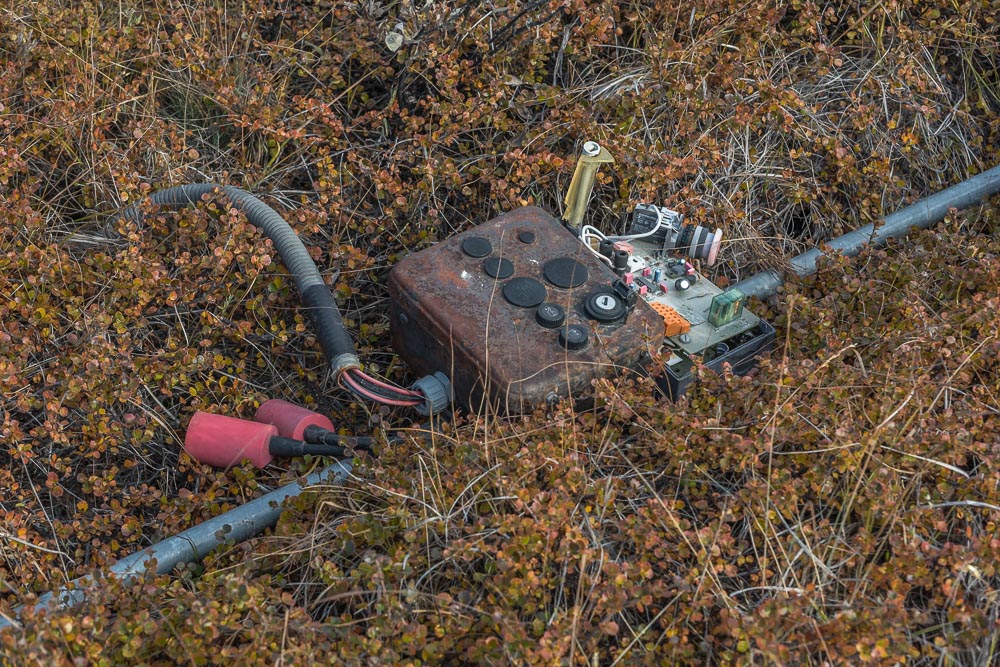 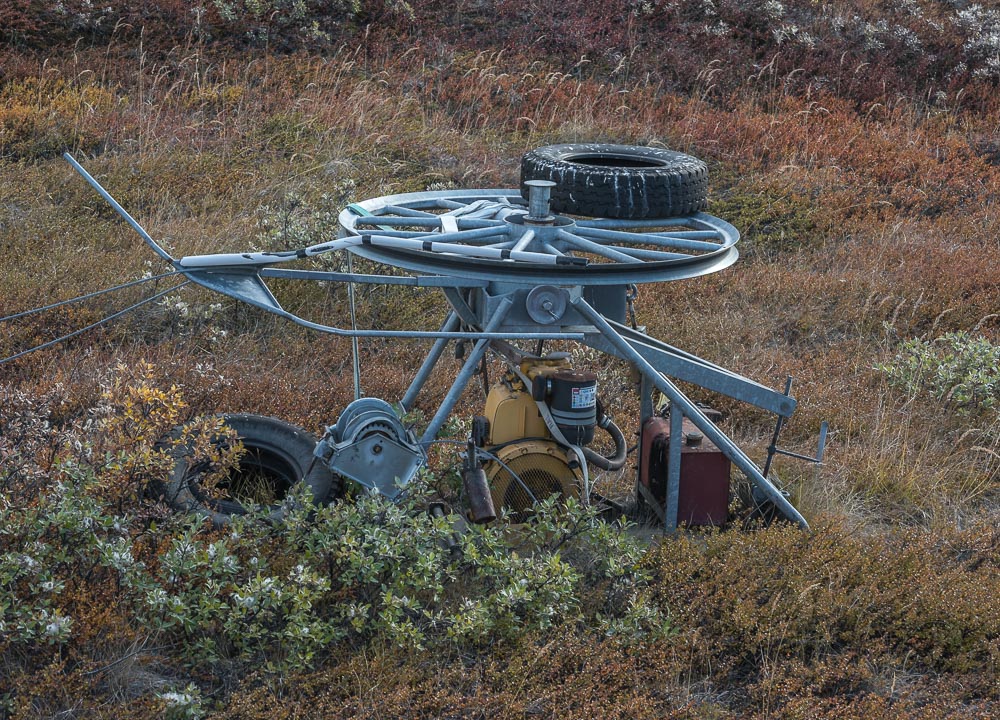 Another view of the skilift assembly shown in the photo at the top of this post, reminiscent of a found object sculpture in the manner of Robert Rauschenberg.